This work is licensed under a Creative Commons Attribution-NonCommercial 4.0 International License.

Introduction   After several months of work, AVEX is proud to present the new and updated light pollution maps for France (Europe ?). As with previous european and french maps, these new maps rely on data from  CORINE Data Land Cover These data, requested by the European commission, represent land artificialization rate. This is a long and meticulous work, which explains that though it began in 2012, these maps are only made available this year. We have interpreted these data in a graphical fashion : the more artificalized is the land, the more it emits light (greater artificalization > more humain concentration > more light). We have programmed an algorithm (based on multi-scalar gaussian) which transforms this data into light difusion. Data are then weighted with altimetry and presence of oceans & forests. We took the opportunity to rethink how we represent long distance light pollution.

For these new maps, we also called on french amateur astronomer community, to perform night sky imaging, following a strict protocol. We received about fifty pictures which did allow us to adjust and refine our model

The classical light pollution map is available from now on as a GoogleMap layer. A map such as this one is requiring more than 10 days of computing using a rather powerful workstation, thus it will remain the only format available for this application. It is limited to a maximum zoom precision of 12,8m per pixel (a more important zoom would have required 4 times the amount of computing). On the opposite, the minimal zoom is of 250m per pixel, equivalent of a 320km area on a 1280 wide screen. Other maps will be available in PDF or Google Earth format, and won’t be limited in minimum / maximum zoom.

White : 0–15 visible stars (without planets) according to the conditions. Very high level of light pollution and all around. Typical of big urban centre and big regional and national cities.

Red : 80–150 stars : constellations and others stars appears. In a telescope, Some Messier object began to be observable.

Orange : 150–250 stars in good conditions. The light pollution is present all around but some darks areas appears. Typicaly the middle suburbs.

Yellow : 250–500 stars. Strong light pollution but the Milky Way can appear in good conditions. Some Messiers among the most bright can be visible with the necked eye.

Green : 500–1000 stars : far peacefull suburbs, Milky Way many times visible but very sensitive to the atmospheric conditions. Typicaly, the glare of light pollution take a large place in the sky and reach at 40–50° of elevation.

Cyan : 1000–1500 stars. The Milky Way is visible most of the time in fonction of climatic conditions but without contrast.

Blue : 1500–2000 stars. Good sky. The Milky Way is easily visible, we began to have the sensation of a good sky, but, some source of light pollution damage the sky and in a second time the sky by reflexion at the vertical of the observer.

Night blue : 2000–3000 stars. Very good sky. The Milky Way is present and powerfull. The light glares are far away and scaterred, they don’t affect the sky quality.

Black : more than 3000 stars. No light pollution problems revealable on the sky quality 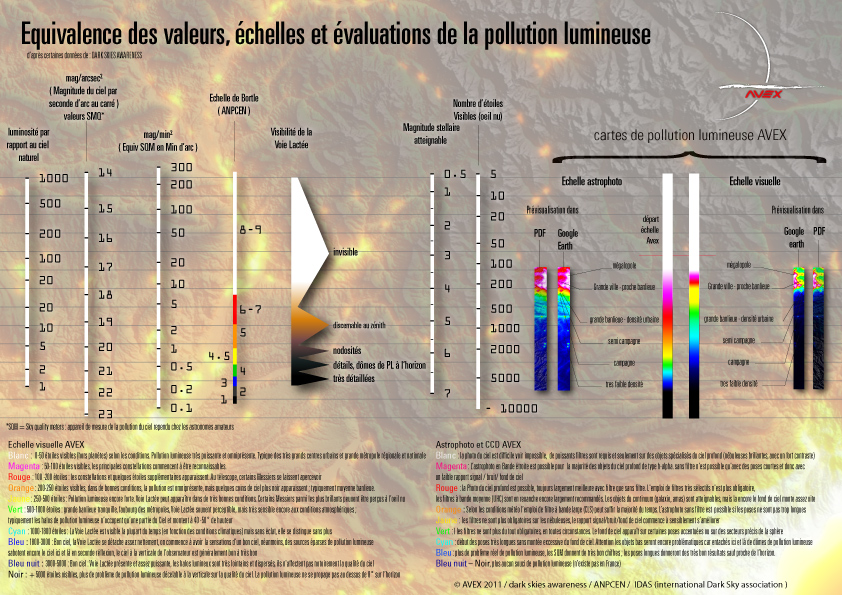 Several formats are available, with proper detail level for consistent resolution on each of them Available formats

Sodium light pollution maps aim at render pseudo-natural aspect of light pollution Those maps will be mainly used for public people, who are non-specialist in astronomy concepts. But thei only have indicative value

download light pollution map file for google earth (700 MB)   Note : PDF formats of those maps are in progress : maps will range from A4 to A2 format. For any other format, framing or custom map, plese contact me (warning : a fee will be asked for custom maps service)

On those maps, values have been heavily maximized (exaggerated) in order to give a view of light pollution impact on deep sky acquisitions. Green / Cyan values can be considered as excellent condition values, but on CCD imaging with fast optics, these condtion can still result into gradient on images Preview and boundaries

Download astro imaging light pollution maps (550MB) Note : PDF formats of those maps are in progress : maps will range from A4 to A2 format. For any other format, framing or custom map, plese contact me (warning : a fee will be asked for custom maps service) Many Thanks to Jean Marie Bonnefont for Translation. Need translation for German , Italian and Spanish too ;)